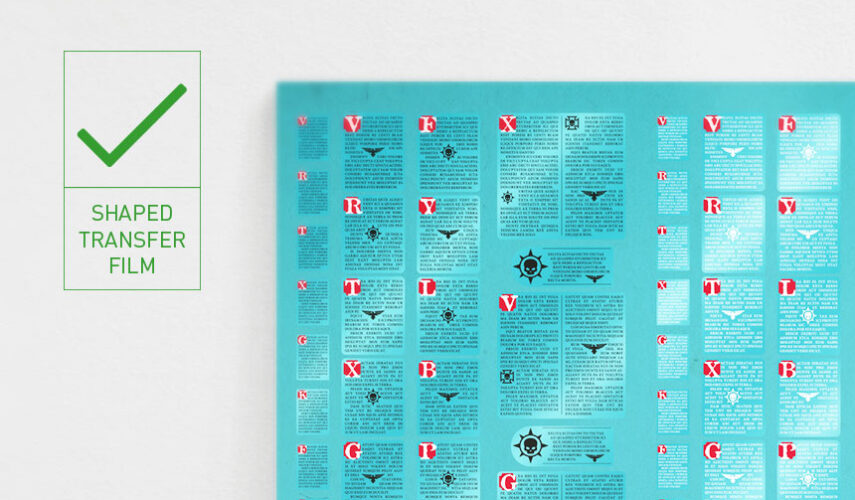 You may have seen an icon on the images of our transfer sheets describing a feature called ‘shaped transfer film’ – but what does this mean? To answer the question we first need to describe what transfer film itself is. Transfer film is the clear, usually glossy, transparent film on which waterslide transfers are printed. The blue paper underneath is coated with a mild adhesive and when you soak the transfer in water the film separates from the paper, taking some of the adhesive with it, and this is what helps it stick to the model on which the transfer is placed.

Most transfer printing companies use paper that is pre-coated with both adhesive and transfer film all over the sheet, and simply print the graphics on top.

The main disadvantage of all-over transfer film is that you have to carefully cut around the decal with a scalpel or hobby knife, risking damage to the decal (and your fingers!), to minimise the amount of film that surrounds it and ends up on the model. It can also be difficult to slide the decal off the paper because you will be gripping both paper and film with your tweezers.

Thanks to our professional printing process, with Mighty Brush transfers the hard work is already done for you, because the film is ‘shaped’ around the decal, tightly hugging the graphic as closely as possible to minimise the amount of film that ends up on your model. This makes the transfers quicker and easier to apply, and makes the job of hiding the film easier too for a ‘painted on’ look.

Check out our range of waterslide transfers with shaped transfer film here!

Previous How to get started airbrushing miniatures

© The Mighty Brush. All rights reserved.

This website uses cookies to improve your experience while you navigate through the website. Out of these cookies, the cookies that are categorized as necessary are stored on your browser as they are as essential for the working of basic functionalities of the website. We also use third-party cookies that help us analyze and understand how you use this website. These cookies will be stored in your browser only with your consent. You also have the option to opt-out of these cookies. But opting out of some of these cookies may have an effect on your browsing experience.
Necessary Always Enabled
Necessary cookies are absolutely essential for the website to function properly. These cookies ensure basic functionalities and security features of the website, anonymously.
Others
Other uncategorized cookies are those that are being analyzed and have not been classified into a category as yet.
Advertisement
Advertisement cookies are used to provide visitors with relevant ads and marketing campaigns. These cookies track visitors across websites and collect information to provide customized ads.
Analytics
Analytical cookies are used to understand how visitors interact with the website. These cookies help provide information on metrics the number of visitors, bounce rate, traffic source, etc.
Functional
Functional cookies help to perform certain functionalities like sharing the content of the website on social media platforms, collect feedbacks, and other third-party features.
Save & Accept
Powered by