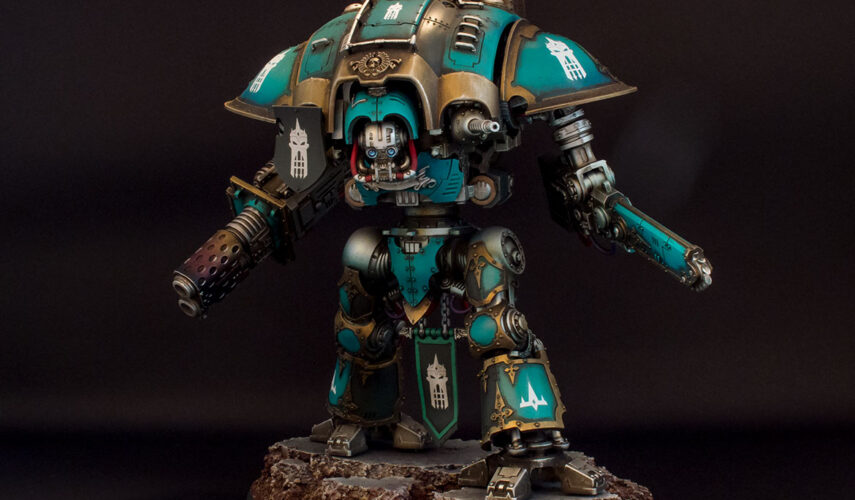 Admittedly I’m a bit late to the party here – there are loads of tutorials online on this subject, including those dealing with the newer Crusader / Warden Knight kit. However when I finally got around to building my first Knight and watched a few videos I picked out a few things I thought could be improved, so perhaps there is room for one more. No doubt there will be things that can be improved still, so if you have and pointers from your own experiences please post a comment. As I mentioned I’m using the original Paladin / Errant kit but the principles are the same for the Crusader and Warden.

I built the legs completely except for the armour panels and banner which will be painted separately. I then sawed off the nub on top of the dome and sanded the piece flat until I reached the cog-symbol outline, then glued a 10mm x 1mm magnet on top. 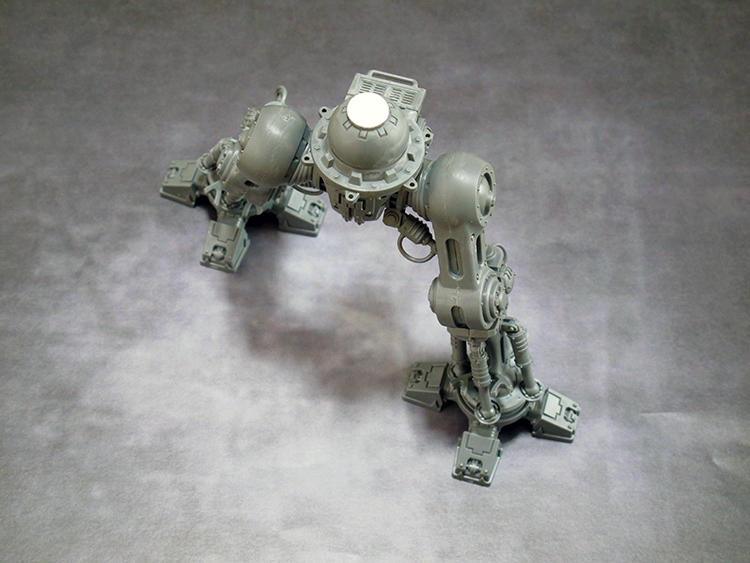 I also filled two of the ‘toes’ on each foot with green stuff and, when cured, drilled holes and inserted pins cut from large paperclips to fix the model to a cork base.

To magnetise the torso to the legs I glued a piece of plasticard on the inside of the torso assembly to cover the hole at the bottom, then filled the underside with green stuff and embedded a 10mm x 1mm magnet corresponding to the one on top of the legs. 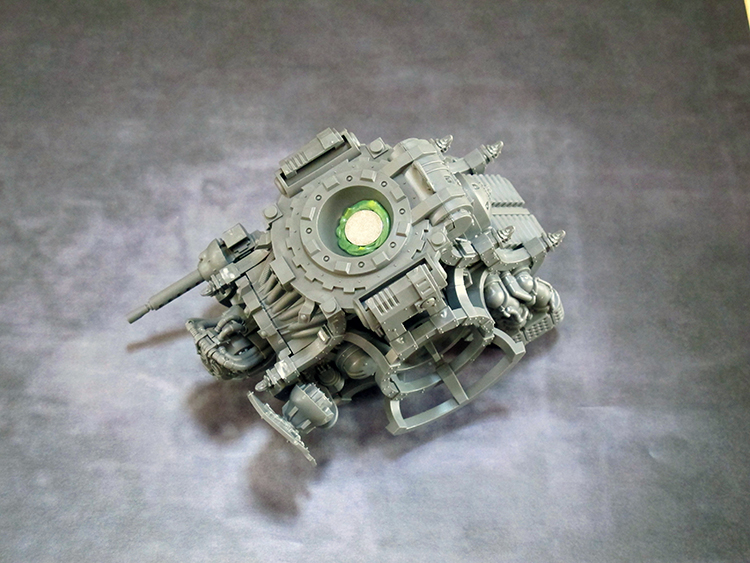 I sawed the bottom-most piece off the upper arms, sanded them down and glued a 6mm x 1mm magnet onto each. I then filled the cavities of the weapon mounts with green stuff and glued the corresponding magnets into them, slightly recessed to allow for the upper arms to sit inside slightly.

NOTE: I didn’t have the magnets when I filled the weapon mounts with green stuff. If I had I would have used the upper arms to push the magnets into the lower arms while the green stuff was still soft, to ensure a completely flush fit. 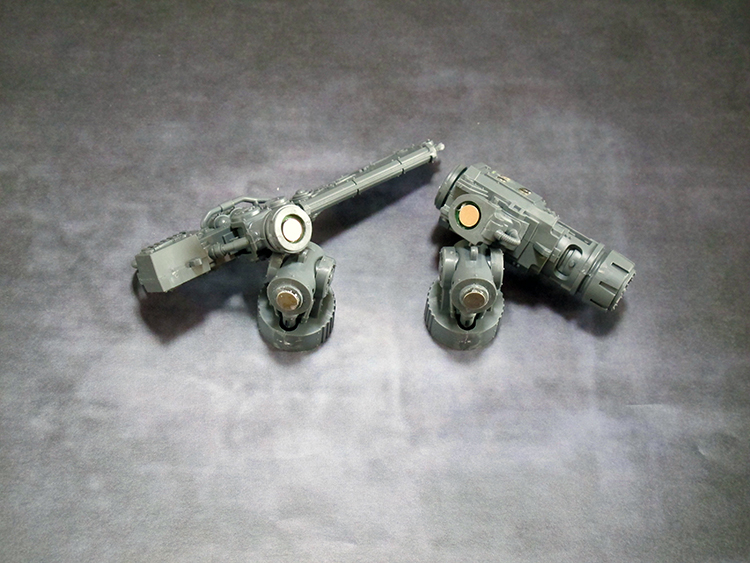 For the ammo feeds I drilled four 3mm holes in the gun mount (working up from 1mm pilot holes), glued a piece of plasticard to the inside and glued 3mm x 1mm magnets into the recesses. Once the glue was dry I attached the corresponding magnets to each, filled the ammo cases with green stuff and pressed them against the mount to embed the magnets. I repeated this for each ammo feed. 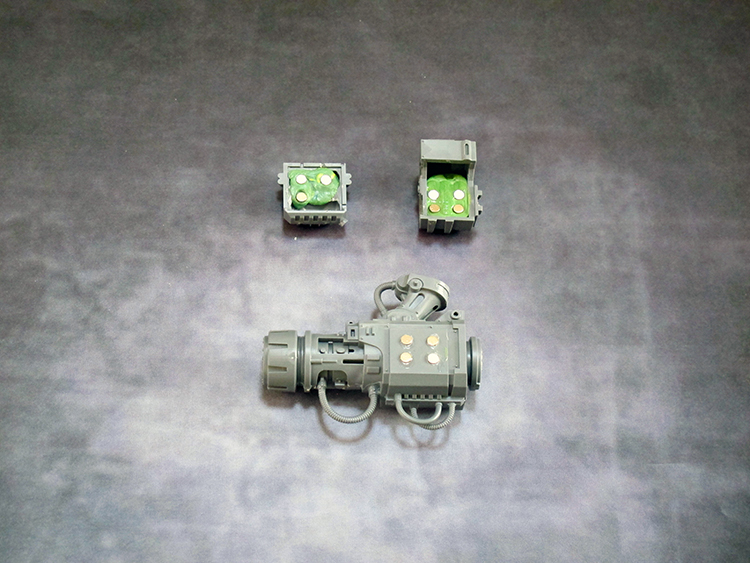 To achieve swappable weapon types I opted for plasticard telescopic tubing rather than magnets (an idea I got from Geeks40k YouTube channel). The tubes are from the Gale Force 9 Plastic Accessory Variety Pack.

First I glued a piece of the largest tube into the weapon mount making sure it was straight as it dried and sawed it off flush with the mount. I then glued the next size tube (which fits snugly) inside the first and again sawed it flush. Then I used the third size tube and glued into each of the weapon front-ends. I had to trim the inside of the thermal cannon slightly with an Xacto knife to fit it in.

Lastly I drilled through the small hole where the missile launcher and AA gun (from the Crusader / Warden kit) are mounted using a 2mm bit. I then glued a 6mm x 1mm magnet to the inside of the carapace in case I want to add these weapon options later. 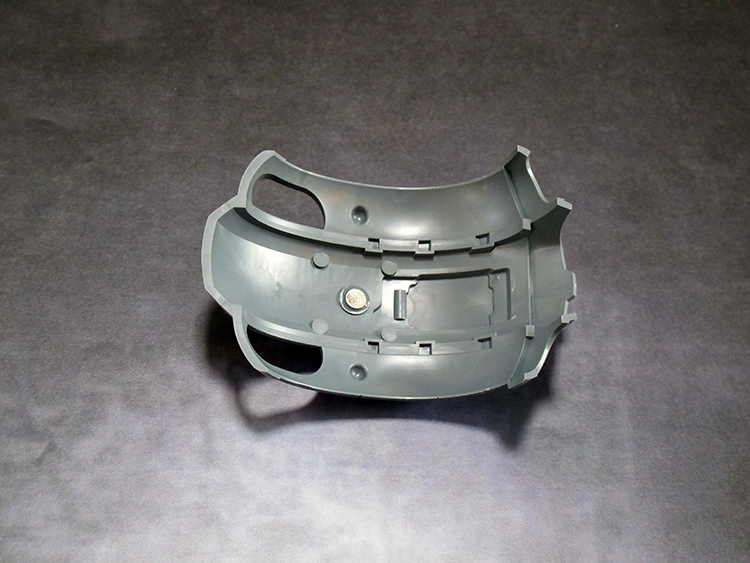 And there you have it – a fully magnetised Imperial Knight! 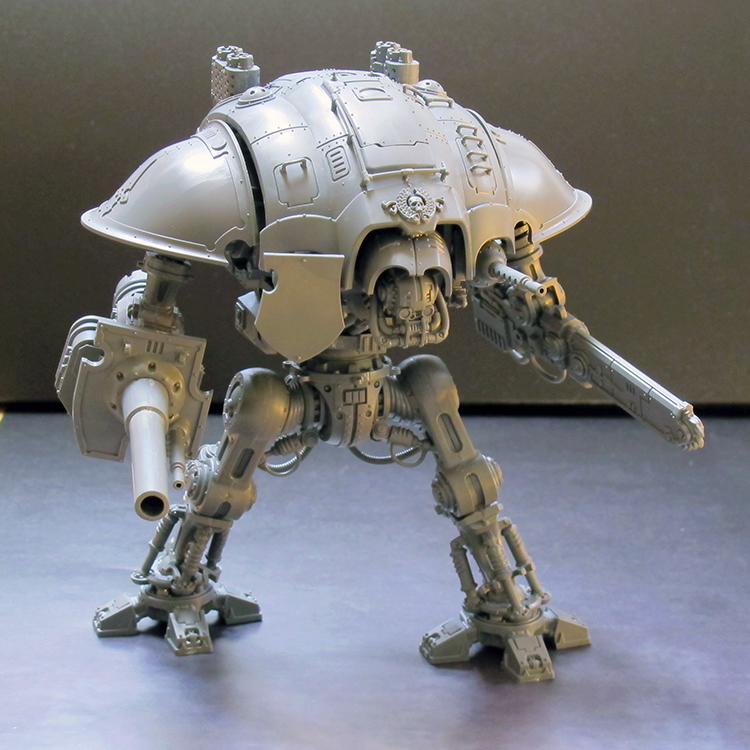 5 Comments “How to magnetise an Imperial Knight”

© The Mighty Brush. All rights reserved.

This website uses cookies to improve your experience while you navigate through the website. Out of these cookies, the cookies that are categorized as necessary are stored on your browser as they are as essential for the working of basic functionalities of the website. We also use third-party cookies that help us analyze and understand how you use this website. These cookies will be stored in your browser only with your consent. You also have the option to opt-out of these cookies. But opting out of some of these cookies may have an effect on your browsing experience.
Necessary Always Enabled
Necessary cookies are absolutely essential for the website to function properly. These cookies ensure basic functionalities and security features of the website, anonymously.
Others
Other uncategorized cookies are those that are being analyzed and have not been classified into a category as yet.
Advertisement
Advertisement cookies are used to provide visitors with relevant ads and marketing campaigns. These cookies track visitors across websites and collect information to provide customized ads.
Analytics
Analytical cookies are used to understand how visitors interact with the website. These cookies help provide information on metrics the number of visitors, bounce rate, traffic source, etc.
Functional
Functional cookies help to perform certain functionalities like sharing the content of the website on social media platforms, collect feedbacks, and other third-party features.
Save & Accept
Powered by